Slowed down by a “slippery and wiry” pulse this week (I’m intrigued by the language of acupuncture), my birding has been mostly confined to a few sunny hours in my backyard.  Fortunately, my backyard is immediately adjacent to the levee and river, just upsteam from the Water St. Bridge.  A pretty wide array of  birds fly in from the river for their steady stream of dependable treats.

This last Saturday, my neighbor Batya, who serves as my good-luck charm in birding, appeared with her binoculars, declaring that she was looking for a Savannah Sparrow, hopefully hidden among the four other species of sparrows that hang out here.  I told her that I was longing to see a LINCOLN’S SPARROW, and that I would happily join her far-fetched effort. I had never seen a Lincoln’s Sparrow on the river, much less my backyard.

Within two minutes of sitting down, we noticed a movement in a nearby Japanese maple tree. A bird hopped out onto a branch, making  itself very visible. It was cautiously eyeing the hopper bird feeder filled with millet. At first glance, It looked like another SONG SPARROW, pretty common in my backyard these days.   But wait! It had

those telltale crisp stripes on its breast. .  Batya and I didn’t move a muscle, not wanting this prize to fly away.  We carefully went over every detail. The heads of the two species are almost exactly the same – same crown, same eyebrow, same auricular, same whisker.  But then you get to  the throat and  the breast.  The cosmic designer of this close, but more delicate, cousin of a song sparrow must have used a long, thin and finely bristled brush to paint the more delicate streaks on the throat and the buffy breast.  Convinced that we were looking at a Lincoln’s, I risked taking a photo.  Batya went for the books.  We triumphantly confirmed the identity. Yes, it was!   A LINCOLN’S SPARROW.  My first!  And in my backyard! Unlike the ubiquitous Song Sparrow, whose year-round range covers almost the entire United States, this far less common cousin breeds in the Sierras, Canada, and Alaska, and turns up here in Santa Cruz only in winter.  Furthermore, it’s winter range is very limited – mostly along the California, Oregon and Washington coast in the U.S. and then south of the border.  A special visitor!  Next time you see a “song sparrow” look again.  It may be a Lincoln’s.  Or if you are in a grassy field, you could be looking at a Savannah’s, also a winter guest.  Be sure to tell Batya.  She was a good sport about the Lincoln’s, in fact as excited as I was.  But I’m sure she is still dreaming of a Savannah’s.

The day after our sparrow success, I was bundling door hangers for the election and talking about birds with Sandra and Peter Nichols, two other bird enthusiasts and river walkers.  I told them about the Lincoln’s and Sandra got a smile on her face and told me a somewhat similar story of prescience that happened quite recently.   Here’s the story as I remember Sandra telling it:

“I especially love the BELTED KINGFISHER, the Wood Ducks and the Hooded Mergansers.  I can’t stand it if I don’t see these birds at least once a year. Recently, Peter and I were walking along the river and thnking that we hadn’t seen our special kingfisher perched on her special spot on a wire just upstream from the Riverside Bridge.  I began to worry that the City had for some reason removed the wire and inadvertently gotten rid of one of the kingfishers’ favorite fishing perches.  We had passed the spot when I thought about this so I wanted to make sure to check it on the way back.  I had a really positive attitude, feeling somehow that I was going to see the kingfisher. And, yes, it was there, perched on the wire that we had been looking for and missed. The wire was there, the female kingfisher was there, and we were happy.”

Sandra’s face was wreathed in smiles as she told me this story and described how beautiful the Belted Kingfisher is, especially the female.  She said mischievously, “the female has two beautiful necklaces, not just one like the male.  And one of the necklaces is a beautiful russet color. I just love this bird.”

And I just love hearing stories like this.  How did Sandra know she was going to see this bird?  They are  not that common on the river. My only photo dates back to 2015 and doesn’t do this handsome bird justice.   I agree that it is a magical bird and in fact have a watercolor painting of a female kingfisher in my living room.

It is almost equinox so I was not surprised to get an e-mail this week from Alex Rinkert saying that, “Spring is just around the corner so the time has come to begin Year 4 of the Santa Cruz County Breeding Bird Atlas II…this will be the penultimate year of field work. Nearly 100 atlasers have contributed observations to the project over the years. We have maintained a large contingent of regulars but are still hoping to attract new atlasers and re-interest former atlasers.”

If you are a birder but have never done atlasing before, there will be two trainings this year, March 22nd and 28th from 9-11.  Please contact Alex at arinkert12@comcast.net to register for the free training.  I took it two years ago and learned a lot about how to look for evidence of breeding that I had never really thought of.  CLICK HERE to go to the Santa Cruz Bird Club website for more information on the project.  I especially recommend opening the document called “ Breeding Codes” which will give you a clearer sense of what the training includes.

Just after writing this, I looked out my window and saw a SCRUB JAY with the temerity to

actually break off a small branch of my Japanese maple and fly away with it.  I guess that will be the first entry in my breeding bird report this year, i.e. CN-carrying nest material. I may report my indignation but also my sincere hope that she nests nearby and that her family flourish

I created a little altar for my mail-in ballot this year.  May people who love our natural environment be elected to office, up and down the ballot. 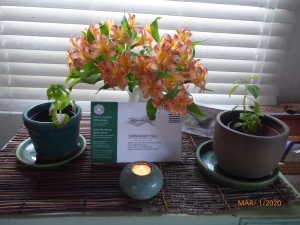 4 thoughts on “Speak Their Names and They Will Appear”