Since I haven’t been out on the San Lorenzo River much recently (except to check the height of the river) I was very happy when my friend Batya Kagan told me about some interesting things she had seen on a recent river hike. I asked her to write up this guest report:

“Today (2/17) I saw one male HOUSE FINCH repeatedly feeding a female House Finch that was sitting beside him on a branch amongst other House Finches.

I was curious about this feeding behavior, not knowing if this was a common courtship display.  I took out The Birder’s Handbook and looked at courtship displays and this behavior was not one of them.  Then I noticed a note that said “incubating female occasionally fed by males”.  It made me wonder if they could possibly be already nesting – or perhaps they were practicing for that eventuality.  Either way, to me this is an early sign of spring in the air.

Another sign of spring also happened today as I walked the levee path towards the Tannery.  I noticed a very brightly colored and handsome male YELLOW-RUMPED WARBLER (Audubon’s) in a sycamore tree just beginning to leaf out. A few seconds later, a perky female appeared in the same tree – yet another sign of spring. 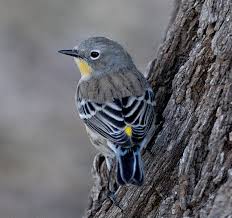 A few days earlier, walking along the same stretch of river, I noticed that some AMERICAN COOTS were flying from the far-side of the river towards the side I was on.  I don’t often see them flying and I was wondering if they were being flushed by something.

I had a pretty clear view and saw no sign of animal or human that would be flushing them.  I kept watching as first one Coot, then another, would repeat that same quick (what looked like a flushing flight) over to my side.  Once over on my side, they would swim around contentedly.  Then it dawned on me… they can’t swim across the river at this time.  The river is too swift.  So in order to join their buddies, they have to fly.  They are rather ungainly fliers so perhaps that is why they looked like they were being flushed. “

Instead of getting out on the river myself, I have been gloomily studying the new 2030 Parks Master Plan –  brooding unhappily over the almost total invisibility and disappearance of our environmental concerns and dreams for the San Lorenzo River Corridor and San Lorenzo Park. In fact, almost all environmental considerations for our Open Spaces (Pogonip, Moore Creek, Arana Gulch, Jessie St. Marsh, etc.) seem to be headed for the scrapheap (or at best a ‘study’ in the case of Jessie St. Marsh). This in spite of our many efforts to communicate with Parks and Recreation over the last two years. It seems our dreams will be buried in the graveyard of of the Appendices of this humongous 465-page document (pages 389-392)! Our recommendations certainly didn’t show up in the February 7 presentation to the City Council nor are they reflected in the budget.

If we follow the money it usually tells the story. The proposed budget for the San Lorenzo Park/Corridor is $2,353,800 .  Of that TWO PLUS MILLION. not a single penny is being spent on habitat preservation or restoration or amenities to promote the appreciation of nature.   ($44,800 is allocated for “the addition of more colorful gardening displays”, whatever that means.)

Under the $660,000 vague rubric of “additional recreational facilities” above we might expect to find such pet projects as food courts, a Dennis the Menace playground, pump tracks, removal of the Duck Pond, obstacle courses, public art, plazas, etc. 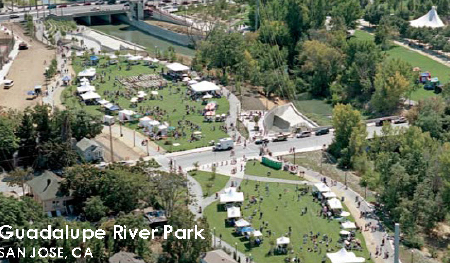 The Report shows a picture of Guadalupe Park in San Jose as an example of it’s vision , a park built along an apparently denuded concrete channel with no habitat value! That says it all!

As an excellent archivist, Noah Downing, the Parks Planner, did dutifully include all the ideas we submitted to Parks and Recreation in Appendix 5.5 -51 through 54. Just for the record, here are many of those ideas that you and I and other environmentalists futilely submitted during the two-year study period.

May our complaints never get in the way of remembering our dreams.

One thought on “Underneath Every Complaint is a Dream”