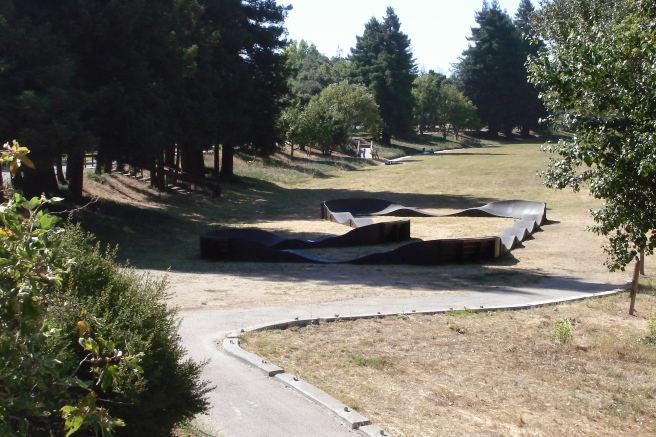 It’s hard to admit that I have reached the ripe old age of 78 and am still given to fantasizing that somehow our city leaders will agree with me if I just give them solid information. The pump track for BMX bikes was installed about two weeks ago, three months later than scheduled. There it sits on the only remaining  stretch of true riparian forest in the City, a perfect monument to the disconnection with nature in which all of us are steeped.  It also highlights the futility of such efforts to address the homeless issue.   It was almost funny.  Stretched out along the river, right next to the pump track,  I saw eleven (11) homeless people, mostly sleeping.   (You can see three in the photo if you look carefully.)

I had hoped that the City would move in the direction of planting more native trees behind the Courthouse, creating a more welcoming atmosphere for County workers as well as wildlife.  The hopeful aspect of all this is that the  track is portable and will theoretically be moved during the rainy months.  Hopefully the City will find a more appropriate place for the pump track next spring and join other cities in the work of enhancing our urban spaces with wildlife habitat.

I decided to talk to some workers in the County Building about their impressions of the track. They were hurrying to work but seven people did stop long enough to answer a few questions.  Most shrugged their shoulders when asked what they thought about the track, apparently not seeing it as either positive or negative.  They looked a little blank when I asked them if they worried about a possible negative impact on wildlife. One woman with training in biology did show more concern, also worrying that it would attract graffiti.

Slightly discouraged by my short conversations with the  County workers, I decided to talk to some of the homeless people sitting and lying on the ground just a short distance away. I met Sam who gave me an animated description of a GREAT BLUE HERON stalking a gopher. He described in great detail how the GBH senses the vibrations underneath the ground, notes the moving grass, and is perfectly poised to strike when the gopher pops its head out for a split second.

Sam also gave me an informative lecture on how this years’ family of  CANADA GEESE parents communicated with their five goslings. Sam imitated the sounds the parents made just before they led them into the water, pointing out that the parents first taught the young how to swim, and then how to fly. His relationship with the natural surroundings was in stark contrast to that of most of the folks who spend their days inside the County Building.

As I wrote two weeks ago on this blog, there is a much more serious issue about wildlife destruction at the Jessie St. Marsh.   The Parks and Recreation Department has called a neighborhood meeting at the Marsh itself, at the corner of Jessie St. and Lemos St. tomorrow, Wednesday, at 5:30. The purpose is to discuss the fate of  this critical wetland area, an especially timely meeting in light of the recent flooding.  Instead of absorbing the river’s overflow as a marsh naturally does, the City is actually pumping water out of the Marsh into the River.  Aaaaagh!   People from the broader community who are interested in the Marsh are welcome.   Maybe I’ll see you there.

Well, Jane. I will cut this short this time. I loved your last letter. All the mysteries and confusion around the sand bar breach you described have become a very hot topic online. Your regular monitoring of the story has been very helpful and I look forward to updates. I was also very touched by your story of the curious friendship between the wounded COMMON GOLDENEYE and a stray COMMON MERGANSER. Plus – your tenderness for the large gopher snake was impressive, as was your courage in moving it to a safer spot. I’m such a scaredy cat about snakes.  I probably would have believed the guy who said it was a rattle snake.  Lots to learn.  But I am also glad that such a creature exists on our River!

May our eyes and hearts stay open to the world of non-humans!

2 thoughts on “The Pump Track is Here”