I loved hearing that some SANDERLINGS stopped in your neighborhood on their way up to their breeding grounds in the Arctic Tundra. I so love these troupes of  tiny dancers – so mysteriously linked to each other in their feeding frolics with the waves.  I had one of my most mystical bird experiences a couple of years ago when I saw a flock of about 50 Sanderlings suddenly rise up together from a rock ledge and fly in perfect formation in the shape of an infinity sign. My eyes could hardly stay in my head!  Bon voyage, dear Sanderlings.  See you next fall.

I can hardly stay inside these days. I’m so aware of new birds arriving from the south, winter birds leaving, and – best of all – lots of courtship, mating, and nest building. I decided to join the Bird Club’s weekly trip this last Friday along Branciforte Creek – starting near the Market Street Senior Center and ending at the confluence of Branciforte and Carbonera Creeks.  The Creek feeds into the San Lorenzo River just below San Lorenzo Park.  It is a birding hotspot that people may not know about, right in the middle of town. We found 36 species of birds in the three-hour hike.

I had no sooner arrived than I saw an OAK TITMOUSE fly into a large hole in a tree. It’s nest? Jeff Bleam, the leader of the walk, asked me if I had seen nesting material. No, I hadn’t. He said at this time of year, the bird was probably checking out different cavities before it chose one for a nest. Ah, I remember those apartment hunting days!

Not too long into our walk we were all entranced by an extremely busy CHESTNUT-BACKED CHICKADEE stuffing her mouth full of pampas grass fluff, clearly determined to create the fluffiest, softest nest possible for her chicks. In her eagerness the busy parent kept stuffing in more fluff than her beak could hold, losing as much as she was stuffing in. I also remember getting way too much stuff for my son’s nursery.

Finally, I saw this SCRUB JAY proceeding at a less frenetic pace – maybe a seasoned nester.   After eyeing me calculatingly for some time, she dashed off, disappearing into a nearby hedge.   Spring has definitely sprung!

For readers who may not know about our wonderful Santa Cruz Bird Club, we have walks every Friday morning starting at 8 a.m. Schedules are on our website  http://www.santacruzbirdclub.org. Here is a photo from this last Friday of our group intently studying one of the 36 species that we found.

The second photo is of Jeff Bleam, the leader of the walk, recording a mysterious song that he thought might be an early-arriving BLACK-THROATED GRAY WARBLER. It was finally decided, though, that the mystery bird was probably a TOWNSEND’S WARBLER with a variant song. Check out this link for a list of all 36 birds that we saw along Branciforte Creek. http://ebird.org/ebird/view/checklist?subID=S28436331

Some of the birds we saw weren’t ready to make a nest yet.  They were still singing their hearts out in order to attract a mate. “See what a great singer I am, please marry me!” I saw a male DARK-EYED JUNCO performing his distinctive musical trill from a high perch, sitting still long enough to let me take his photo. Ground nesting birds like these juncos are the ones I worry about the most – how do any of their babes survive when the nest is built among the roots of fallen trees, or in the tules somewhere, or even on bare rock or a hole scraped in the sand.  Some birds put such time and care into their nests, others don’t seem to care.  But they have all figured out how to survive.

I was also happy to see a sweet HERMIT THRUSH singing away, but suspect it won’t stay around too much longer before it is time to head north to breed.  They breed as far far away as Alaska, usually leaving  in early April. Has this one decided to stay? I think a few do. Or do they mate here and then wing north together?  Or was she just singing to express what I think we all felt – grateful for such a beautiful morning in Santa Cruz.

My favorite photo of the day was one of a pretty well concealed BLACK-CROWNED NIGHT-HERON, absolutely motionless but with her startling red eyes wide open, watching.  She was resting, waiting for nighttime to arrive so she could start her nocturnal stalking of delicious fish once again. Night-herons stay here all year round, but have never been seen nesting along the urban river. I wonder where they go. Have you even wondered what makes some animals nocturnal hunters? One of the birders told me that  in the case of the Night-heron, she is avoiding competition from the SNOWY EGRET and GREAT BLUE HERON. Everything is just unbelievably interconnected. 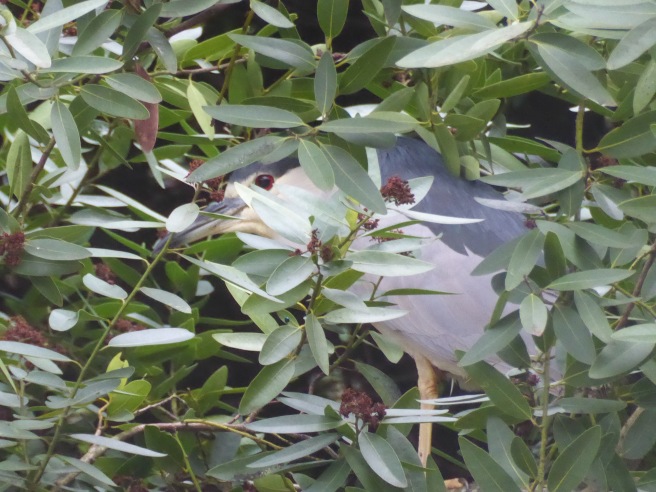 I’m reading my favorite book of the year. It’s called Subirdia, Sharing Our Neighborhoods with Wrens, Robins, Woodpeckers and Other Wildlife by John Marzluff. His surprising thesis is that suburban areas that lie between paved-over cities and woodlands can potentially have more biodiversity than the more natural area nearby. Apparently, our gardens and urban parks, bird feeders, bird boxes, etc. provide amenities that a natural woodland sometimes cannot offer. But it’s not that simple. I highly recommend the book.

If I could have one wish for this year, I would very unreasonably ask to become every species ever found in Santa Cruz County – just for one day. That would be around 400 species, about one bird a day for a year. This would be my kind of trip – no airplanes, but a long, long trip in every other sense. I’ve clearly been reading too much science fiction.