I kept dropping my jaw on the ground  as I read your hilarious tale of a SNOWY EGRET trying to snatch food from a COMMON MERGANSER’S beak, followed by your lively account of the forwardness of a female Common Merganser, refusing to be passive in this heating-up mating season. I hope all our readers got a chance to get their jaws dislocated as well.

I received a big surprise from Kate for my 78th birthday – a wonderful new spotting scope. 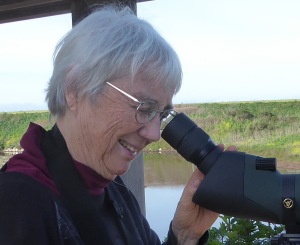 Yesterday morning I set up the scope in my back yard (which backs up to the levee) and could actually make out the yellow eyes of our local, juvenile RED-TAILED HAWK in one of her favorite hangouts atop a redwood tree across the river from me!  Perhaps she was peering at me as I peered at her.  Amusing to think that she has her own built in scope, about 8 times more powerful than my human eye.

Speaking of Red-tailed Hawks, I have finally found the answer to a question that I am constantly asking myself, i.e.  why are AMERICAN CROWS constantly and obsessively mobbing Red-tailed Hawks? I think I found the answer in the last issue of the Audubon magazine which had an article about crows called “Bird Brainiacs”. First of all, I learned that red-tailed hawks are indeed dangerous predators of crows.

Secondly, the article points out that not only do crows have extremely well-organized social systems but they have exceptional memories. These memories will actually allow a band of crows to pick out an individual hawk that has mistreated one of their band! If we see a mob of crows harrassing a red-tailed hawk, we can be pretty sure that it was that specific hawk that must have committed some outrage, an outrage that the whole band of crows is never going to let him/her forget! And what’s more astonishing is that the crows can tell their kids about their grievances and about who is the guilty party. Yes! Believe it or not, scientists have shown that crows can pass on knowledge about a particular individual to the next generation. I love to read this stuff.  I feel kind of sorry for Miss Red-tail. I have never seen her catch a crow. Nevertheless,  she is subject to regularly mobbing by them. She may be paying dearly for a single crow dinner. Will she be persuaded by the crows’ determined harassment and forsake her crow dinners?   Will she learn to stick to the ground squirrels that are plentiful and will not mob her! Even if she is pressured into reforming, will the crows ever forgive her? I must remember not to outrage a crow and make a lifetime enemy.  I do admire the crows who, through solidarity and intelligence, have figured out how to keep a stronger enemy on the defensive.

After my backyard scoping, I went out my back gate onto the levee and came upon a friendly man named Robert, an ex-tech worker,  cheerfully laughing at the behavior of the AMERICAN COOTS under the San Lorenzo Park footbridge.  He told me about a Red Raven that he had seen.  When I expressed disbelief, he said his friend had a photo.  I told him I’d definitely like to see one.  I should have asked him if I would need any special equipment to accomplish that.

Robert announced to me excitedly that ‘the river is rollin’. And indeed it was!  It was wide and chocolate brown, loaded with stirred up sediment that it was moving swiftly to the sea. The water the previous night had flooded the  Riverwalk under the Water St. Bridge. rising to almost 12 feet according to the US Geological Survey.

So – on this morning, the  City had lots of workers out cutting up huge logs that had been tossed up on the sides, especially a huge tree trunk under the bridge.

On my way back home down the other side of the river,  I saw lots of debris thrown up where the Pump Track is scheduled to be installed.The whole area was also awash in pools of water. Will this Pump Track really be installed each spring only to be disassembled in the fall? I am wishfully thinking that the flooded Benchlands might cast a sobering shadow on the City’s plans. I hope so.

Somewhere along my path, I caught a glimpse of a SONG SPARROW, singing along  with the stirring sounds of the wind and water, cheerful as always,

Bach never created more variations on a theme than does this small, creative bird! I am beginning to think that each Song Sparrow has its own version of the basic pattern – first a three-note overture, then a buzz and then a flourish of some kind. Does each individual bird have its own song? Does the same Song Sparrow have different songs for different occasions? Maybe I will devote my next life to the study of the songs of Song Sparrows.

Finally, I came upon a woman in a wheel chair, leaning far out over the side of her chair as she turned it  around and around in a large puddle outside of the County Building. I was mystified at first and then realized that  she was entranced by the ripples and reflections in the water.  A soul sister. We were both under the spell of the river this fine windy, river-rolling, shape-shifting morning.

The final treat of the morning  was a short glimpse of my first returning SWALLOW of the year.   It was flying too fast and disappeared too soon for me to even make a guess at which species it might be. Welcome back swallows!

Best of rainy days to you,