How I loved your tales of bathing birds!  Thank you.

Tuesday, the City Council will consider a proposal from city staff to appoint an Advisory Group to come up with recommendations regarding paddling on the San Lorenzo River.  Aaaaah!  Let that not happen!  I hope lots of people will attend and voice their opinions.  I will be there!  I’m working on a letter to the City Council members now.  Tuesday, March 10, 2:30, Santa Cruz City Council chambers.

I have recently come to the very surprising and happy realization that I am able to walk backwards in history as I walk north along the River.  The River behind the Tannery, so close to downtown, has no levee and must look somewhat like it looked a hundred years ago.  Once you pass under the Highway 1 Bridge, presto! There are the towering redwoods, the tall cottonwoods, the stately box elders, the quivering alders – all of them allowed to grow to their natural height instead of being cut down when they just get started. A real, though small, forest.  This is what our urban river might have looked like before the devastating effect of flood control efforts. Still, I have so much to learn about the plant life of the River and what can be done to restore at least a semblance of the original natural habitat. That project should keep me off the street – and on the River!

The Tannery walk has also offered up a wealth of special birds. I don’t have time to write much about each one, but I just want to post their names and photos so readers can see what I’ve been seeing in the last weeks. So much natural beauty is hidden in the secret folds of nature – not apparent to so many bicyclers as they speed on by. I’m afraid many paddlers will miss this, as well. I thought I’d include a good article I just found on the effect of human activity on birds –  Human Disturbance on Waterbirds.

Not quite so flamboyant as other waterbirds during mating season, our year round resident, the PIED-BILLED GREBE, still makes an effort to add flair to her/his appearance.  Here is a photo I took just a week ago of a grebe in her/his breeding costume.  (Both sexes dress up!) The bill turns a bright white and a dark stripe appears. This addition is restrained but handsome. Compare it with the summer non-breeding costume to the right.  Good luck, friend!  May you have many babies. 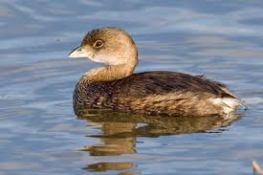 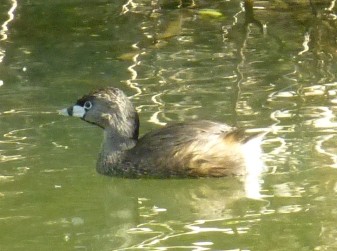 The HOODED MERGANSER was my most exciting find of the last weeks. 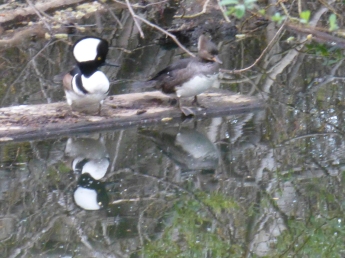 I hadn’t seen any all winter, and then, with eyes widening in disbelief, discovered a pair two days in a row, resting on a floating board behind the Tannery. Both male and female were in full mating plumage, and the male (who cooperated just long enough for me to capture one photo) had his crest fully extended.

I hope our readers will put this on their bucket list if they haven’t seen it. It’s a marvel of nature right in our backyard. 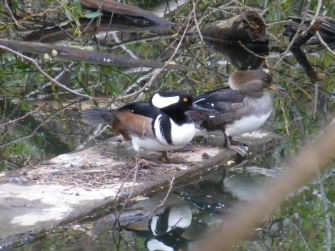 I’ve posted two photos, one with the male crest extended and one with the crest mostly folded down. The female, not to be outdone, has an impressive hairdo. The photo doesn’t do justice to either of them.

VARIED THRUSHES often don’t turn up in Santa Cruz at all – only in years when their normal winter habitat fails to produce enough food. This year has been unusually rich in these beautiful blue and orange birds who sport extremely handsome orange eyebrows. 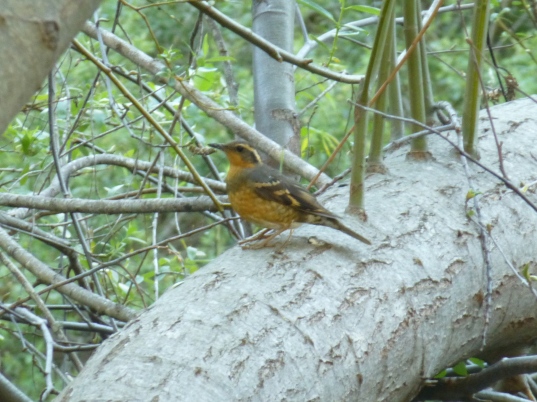 Their misfortune has at least been our good fortune.  I hope they found the food they flew so far to find.  Since I have a penchant for walking at twilight, I have failed to do justice to their beautiful colors. In good light, the blue and orange are really striking.

Finally, here is a BLACK-CROWNED NIGHT HERON. Remember the juvenile I saw several weeks ago that I mistook at first for a hawk! Well, here is the grown up version of that same bird, in his handsome black and white coat.

Like egrets, he stands motionless at the riverbank, waiting patiently to catch his prey. Since they are nocturnal birds, this one must have just been waking up and starting his day. It was breakfast time for him as I headed off for dinner and bed.

These are the birds that I am growing to love more and more, even though I know so little about their lives. I don’t want any of us – walkers, paddlers, bicyclers, bulldozers – to frighten them away from the rapidly dwindling number of habitats which are left to them.

Best to you, Jane, on your river walks.